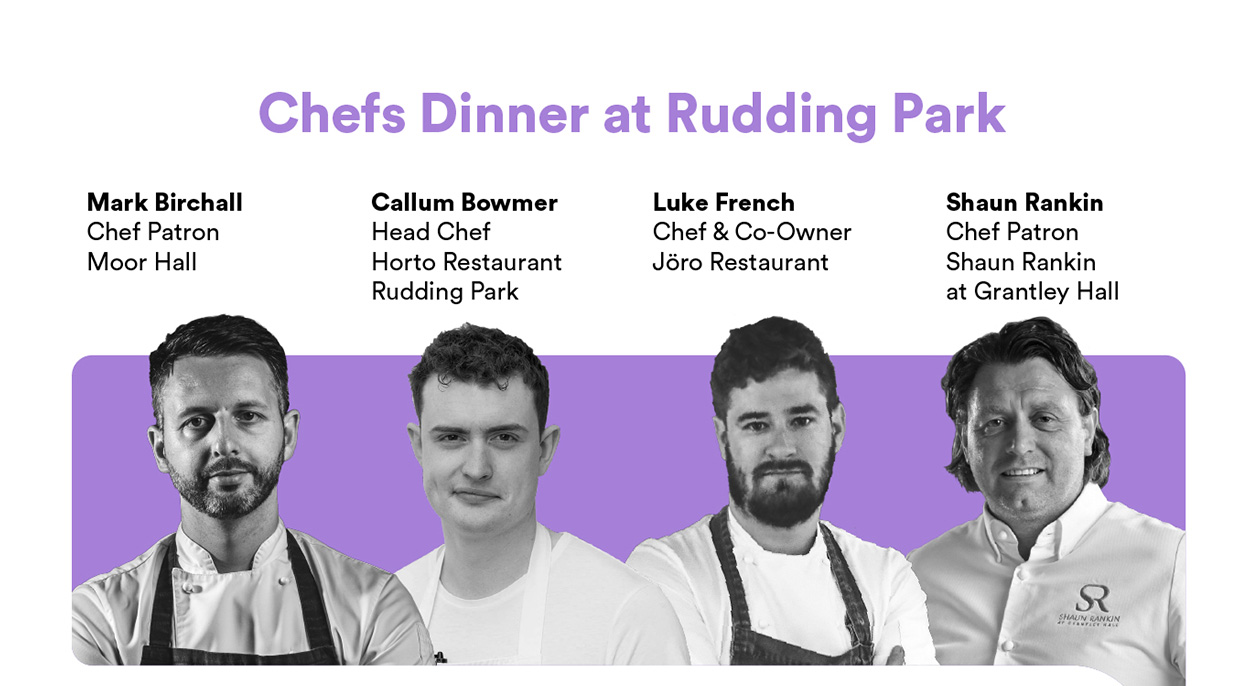 The Stars are out in Yorkshire
Hospitality Action, a charity offering vital assistance to those who work, or have worked within hospitality in the UK, are delighted to announce their Chefs Dinner at Rudding Park, on Monday 8 November 2021.

Our star line up of four talented chefs will prepare a stunning four course dinner for guests to celebrate the great culinary talents of Yorkshire. Stephanie Moon, Chef Consultant at Rudding Park and regular on the food show circuit will be the host for the evening. Enjoy music, drinks and canapes and the chance to win some fabulous prizes throughout the dinner in our auctions and prize draws.

Originally from Yorkshire, Shaun Rankin honed his skills at The Mayfair Hotel in London. He gained his first Michelin star at Bohemia restaurant in 2005 and opened his own restaurant, Ormer in 2013 in St Helier.

Luke has been in kitchens since the young age of 14, starting his journey as a Kitchen Porter where his interest in hospitality and cooking was piqued.

Luke has worked in restaurants including Michelin-starred restaurant The Fat Duck, The White Pheasant as Head Chef, and then The Milestone Pub Group where he progressed to Executive Head Chef for the Group.

It was during his time at The Milestone Group Luke met his future wife and business partner, Stacey and together they conceived the pop-up incarnation of JÖRO. After a successful 9 months, JÖRO opened its doors in December 2016.

Mark Birchall, born in Chorley, Lancashire spent over two decades working at various country hotels and restaurants before opening Moor Hall Restaurant with Rooms in March 2017, with a focus on delicate, produce-driven menus inspired by Moor Hall’s exceptional surroundings and home-grown ingredients. Within six months, the Restaurant was awarded its first Michelin star, with a second star following in the 2019. It also achieved five AA rosettes.

In October 2017, Mark launched his neighbourhood restaurant, The Barn at Moor Hall. In 2018, The Barn was awarded a Michelin Bib Gourmand and named Best Newcomer at Lancashire Life's Food & Drink Awards. The Barn also holds three AA rosettes and a Michelin Plate accreditation.

In August 2021, Moor Hall was named the UK’s Best Restaurant at the Estrella Damm National Restaurant Awards for the second year running.

Callum started his career at Rudding park in 2010 as an apprentice after a successful couple of weeks of work experience. Working in all the kitchens, he eventually settled in the main restaurant - The Clocktower, working with Eddie Gray.

Callum left for a spell in 2012 to work at Baslow Hall, Derbyshire gaining valuable experience before returning to Rudding Park where he worked his way up to junior sous chef. In this time, he entered several competitions including CLA game chef of the year and later BBC’s MasterChef, The Professionals.

In 2016, Horto opened, where Callum became sous chef to Murray Wilson. In 2018, Horto received 3 AA rosettes, which have been retained by Callum since taking over in 2019 following Murray’s departure.