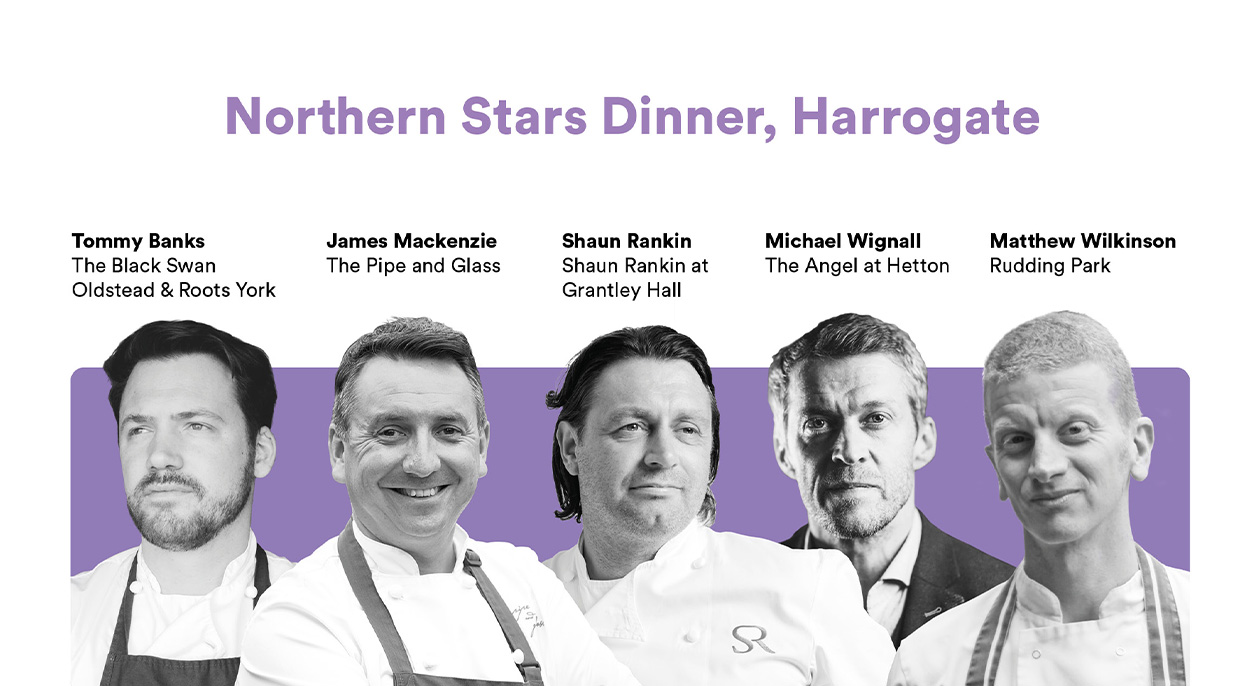 The Stars are out in Yorkshire
Hospitality Action, a charity offering vital assistance to those who work, or have worked within hospitality in the UK, are delighted to announce their first Northern Stars Dinner will be held at Rudding Park - winner of ‘Hotel of the Year’ at the 2019 Catey Awards, on Monday 11 November 2019.

Our star line up of five talented chefs will prepare a stunning five course dinner for guests to celebrate the great culinary talents of Yorkshire. Plus there will be a live feed to the kitchen so you can see the chefs in action.  Stephanie Moon, Chef Consultant at Rudding Park and regular on the food show circuit will be the host for the evening. Enjoy music, drinks and canapes and the chance to win some fabulous prizes throughout the dinner in our auctions and prize draws.

Tommy Banks – Chef Owner, The Black Swan Oldstead & Roots York
Tommy and his family have owned and run The Black Swan Oldstead for the past 10 years, and opened Roots York in 2018, named after his debut book. The Black Swan holds a Michelin star and 4 AA Rosettes and both of his restaurants are on the Estrella Damm National Restaurant Awards Top 100 list. Tommy achieved national recognition in 2013 when he became the youngest Michelin-starred chef in Britain, and competed on Great British Menu in 2016 and 2017, making it through to the Banquet. Over the past four years Tommy has cultivated a 3-acre kitchen garden in the field next to The Black Swan which provides produce for both restaurants on a daily basis.

James Mackenzie – Chef Owner, The Pipe and Glass, South Dalton
James and his wife Kate took over the Pipe and Glass in 2006. In 2010, the Pipe and Glass was awarded East Yorkshire’s first Michelin Star, an award that it has retained ever since. Other notable recognition and awards have followed, including the title of Michelin Pub of the Year, the Good Pub Guides ‘National Dining Pub’ and ‘Yorkshire Dining Pub’ of the Year. As well as consistently featuring in the Morning Advertiser Estrella Damm list of the UK’s Top 10 Gastropubs. James himself also regularly receives industry recognition having been awarded, among others, the Craft Guild of Chefs Dining Pub/Restaurant Chef of the Year in 2016. James’ debut cookbook ‘On the Menu’ was released in 2012 to critical acclaim and won best debut cookbook at the Gourmand World Cookbook Awards in Paris.

Shaun Rankin – Chef Patron, Shaun Rankin at Grantley Hall, Ripon
Originally from Yorkshire, Shaun Rankin honed his skills at The Mayfair Hotel in London. He gained his first Michelin star at Bohemia restaurant in 2005 and opened his own highly-acclaimed restaurant, Ormer in 2013 in St Helier which was awarded its first Michelin star and three AA Rosettes just months after opening. Shaun returned to London where he opened Ormer Mayfair and 12 Hay Hill. His latest fine dining restaurant, Shaun Rankin at Grantley Hall, opened in July 2019 and he has also overseen the creation and planting of his own kitchen garden which will supply many of the vegetables, herbs and edible flowers his dishes require.

Michael Wignall – Chef Patron, The Angel at Hetton, Skipton
Michael’s professional career started at Broughton Park, under Paul Heathcote, followed by stints at L’Ortolan, Old Beams, Cliveden Hotel and the Devonshire Arms, earning a Michelin star at each. He opened Michael Wignall at The Latymer in 2007, which was awarded its first Michelin star and five AA Rosettes in 2011, and a second Michelin star in 2012. In 2016 Michael moved to Gidleigh Park, retaining its two Michelin stars and being awarded five AA Rosettes. Michael and his wife Johanna took over The Angel at Hetton in 2018. He produces incredibly complex dishes, with his attention to detail and dedication to the pursuit of perfection in flavour, texture and appearance knowing no bounds.

Matthew Wilkinson – Development Chef, Rudding Park, Harrogate
Matthew joined Rudding Park in 2005 as a trainee in the Conference and Banqueting Kitchen. In 2007 Matthew left to expand his experience spending time in London and a stint in the French Alps, meeting and learning from great chefs including the Roux family and Pierre Koffmann. He returned to Rudding Park in 2012 as Conference and Banqueting Head Chef, responsible for creating dishes for over 40,000 guests a year. Matthew is a regular on the Yorkshire food scene. His key focus is to ensure his dishes reflect seasonality, food trends and themes.